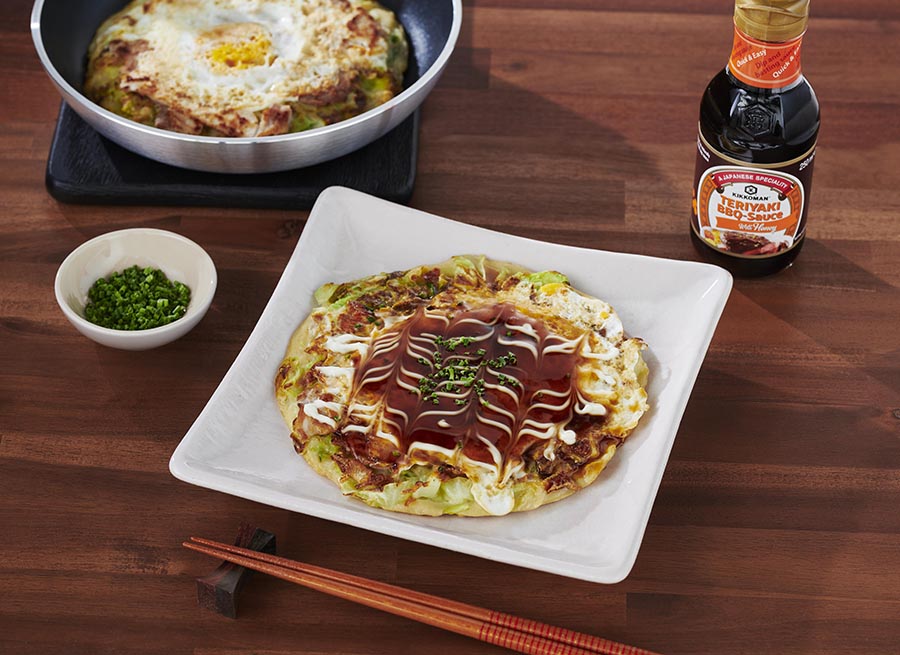 Popular as a festival street food in Osaka, Japan, okonomiyaki are a type of savoury pancake, more akin to a fritter or omelette than the thin British style of pancake. In Japan they refer to it as “Japanese pizza”!

How is okonomiyaki made?

They are traditionally made from flour, eggs, shredded cabbage and slices of pork belly cooked together in a frying pan or on a griddle on both sides, and topped with a selection of condiments such as okonomiyaki sauce (a bit like a thick, sweeter Worcestershire sauce), aonori (dried green seaweed flakes), katsuobushi (dried bonito flakes), mayonnaise, and beni shōga (pickled ginger) - although there many regional recipe variations in Japan.

The Hiroshima version is similar but instead of mixing the ingredients into the batter, the filling is layered up while it cooks, then it’s folded in half and topped with a fried egg or stir-fried yakisoba noodles.

In fact, the name translates to “grilled as you like it” – Okonomi (as you like it) Yaki (grill) meaning that the possibilities for the fresh ingredients are endless. You can use any combination of meat, fish or vegetable you fancy - great for using up leftovers!

If you try okonomiyaki in Japan, there are specific restaurants called Okonomiyaki-ya. There, the chef will either cook the dish in front of you on the teppan (hot plate) or it will be brought already prepared from the kitchen and kept warm on the teppan. It is then sliced up and served on a plate to be eaten with chopsticks. Some restaurants have teppans built into the centre of the dining tables and you can make your own from the raw ingredients provided (with help from a chef if required). Otherwise food stall vendors serve them

Although there’s no certainty to when these delicacies were first created, they became popular in Japan during WW2 when rice was in short supply. The wheat pancake was inexpensive, filling and nutritious and was often given to children to keep hunger at bay.

We’ve created three easy, tasty okonomiyaki recipes (pork, seafood and vegetarian) for you to try at home using readily available ingredients. Feel free to add your own twist with your favourite protein or veg. We hope you enjoy making them!

Check out all our fabulous recipes